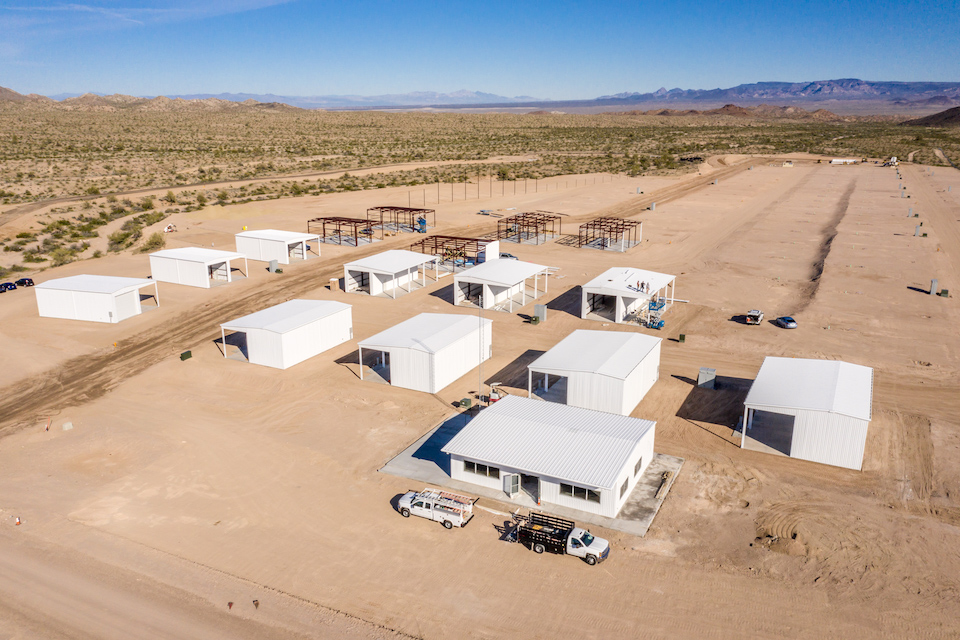 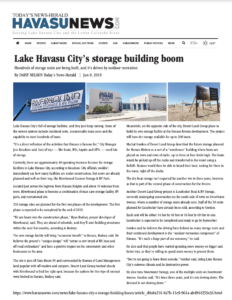 Lake Havasu City’s full of storage facilities, and they just keep coming. Some of the newest options include insulated units, customizable man caves and the capability to store hundreds of boats.

“It’s a direct reflection of the activities that Havasu is famous for,” City Manager Jess Knudson said. Lots of toys — like boats, RVs, kayaks and ATVs — need lots of storage. Currently, there are approximately 40 operating business licenses for storage facilities in Lake Havasu City, according to Knudson. City officials couldn’t immediately say how many facilities are under construction, but more are already planned and well on their way, like Riverbound Custom Storage & RV Park.

Located just across the highway from Havasu Heights and about 10 minutes from town, Riverbound plans to become a combination of man cave storage facility, RV park, and recreational site. 250 storage sites are planned for the first two phases of the development. The first phase is expected to be completed by the end of 2019.

“We are heavy into the construction phase,” Ryan Rodney, project developer of Riverbound, said. They are ahead of schedule, and they’ll start building structures within the next few months, according to Rodney. The new storage facility will bring “economic benefit” to Havasu, Rodney said. He believes the project’s “unique design” will “attract a new breed of RV, boat and off-road enthusiasts” and have a positive impact on the community and other businesses in the area.

The site is just off State Route 95 and surrounded by Bureau of Land Management land popular with off-roaders and campers. Desert Land Group worked closely with Riverbound to find the right spot, because the options for this type of concept were limited in Havasu, Rodney said.

Meanwhile, on the opposite side of the city, Desert Land Group plans to build its own storage facility at the Havasu Riviera development. The project will have dry storage available for up to 300 boats. Mychal Gorden of Desert Land Group described the future storage planned for Havasu Riviera as a sort of a “warehouse” building where boats are placed on rows and rows of racks, up to three or four levels high. The boats would be picked up off the racks and transferred to the water using a forklift. Boaters would then be able to board their boat, waiting for them in the water, right off the docks. The dry boat storage isn’t expected for another two to three years, however, as that is part of the second phase of construction for the Riviera.

Another Desert Land Group project is Luxelocker Boat & RV Storage, currently undergoing construction on the south side of town on Sweetwater Avenue, where a number of storage units already exist. Half of the 30 units planned for Luxelocker have already been sold, according to Gorden. Each unit will be either 14 feet by 40 feet or 16 feet by 60 feet in size. Luxelocker is expected to be completed and ready to go by September. Gorden said he believes the driving force behind so many storage units and their continued development is the “outdoor recreation component” of Havasu. “It’s such a huge part of our economy,” he said.

He also said that people have started spending more money on bigger and better toys, so they’re willing to spend more money to protect them. “You’re not going to leave them outside,” Gorden said, citing Lake Havasu City’s extreme climate and its destructive power. He also runs Sweetwater Storage, one of the multiple units on Sweetwater Avenue. Gorden said, “It’s been three years, and it’s not slowing down. The demand is not slowing down.”